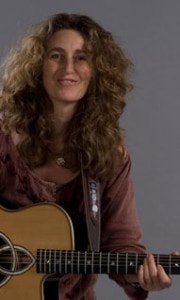 Vicki Genfan
Every now and then an artist comes along whose music reaches out and touches the soul of all who hear them…virtuoso guitarist, singer and composer Vicki Genfan is among those artists… Drawing from folk, jazz, pop, soul and world music, Vicki is redefining ‘singer/songwriter culture.’ With a mastery of the acoustic guitar that borders on pure alchemy, audiences are mesmerized by the waves of sound Vicki creates with just two hands and her voice. Using 29 alternate tunings and the percussive technique she calls ‘slap-tap’, you’ll find the addition of her pure, expressive vocals that dig deep and stir the heart to be the perfect accompaniment on many of her songs. Vicki writes and beautifully sings her own brand of music and lyrics while putting her unmistakable imprint on familiar tunes like the Beatles’ Norweigian Wood. An evening with Vicki is far more than a concert; stories, warmth and humor come gift wrapped in an unforgettable evening of music that leaves the audience always wanting more.
​
Vicki has been recognized among the world’s greatest guitarists and musicians at festivals such as The International Montreal Jazz Festival, Germany’s Open Strings Guitar Festival, Italy’s Soave Guitar Festival, as well as at venues and Performing Arts Centers across the US and abroad. In 2005 she was one of the featured artists on ‘La Guitara’, the first compilation CD featuring female guitarists from around the globe, released by Vanguard Records. With several additional ground-breaking recordings behind her, recent acquisitions of the 6 string banjo, 12 string and baritone guitars, high demand at clinics and music camps and an ongoing European presence, Vicki continues to reach beyond musical borders and into new territory.