Trey Alexander picked up his first guitar at age 15. It was an antique acoustic model that his parents used as a decorative piece in their home. Although he had always loved music, this was​ 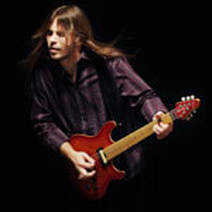 Trey Alexander
Alexander’s first instrument and he began practicing so much that he wore the winding off of the strings. This is when Alexander’s dad, his biggest fan and inspiration, realized that his son was more than a curious teenager with an old guitar. Within a few weeks of discovering this instrument, Alexander began playing regularly at open mics and jam sessions and won his first guitar competition.

​When Alexander was 18, he saw Steve Vai perform live in concert, an experience he describes as “awe-inspiring.” He stayed up all night describing the experience to his father, who listened to him play for hours. His father told him, “You will be one of the best guitar players who has ever lived.” Those words were his father’s last as he died of a brain hemorrhage that night.

Alexander realized that he needed to live his dream, to be a musician, and carry on his father’s legacy. It was then through this experience that he found the power of music! Harnessed, it could help to heal any wound, spiritually and mentally!

Trey Alexander has always had a love for music, but he never expected that the guitar would completely change and inspire his life! The first guitar he ever played was a decorative piece that his father bought for their home. The old guitar provoked Trey’s curiosity- and his passion after he picked it up and began to play! It didn’t take long before he started strumming melodies and for his parents to realize that their son had a natural ear for music. A few months later Alexander entered his first Guitar Competition. He won first place and hasn’t looked back.

A few years later Alexander’s father died unexpectedly. He truly believed his son would be a great guitar player, and although life would no longer be the same, Alexander realized that he needed to continue living his dream and carrying on the legacy of his greatest influence and supporter… his father.

Trey Alexander is now a 26 year old prodigy who has racked up a lifetime’s worth of awards and accolades despite having only played guitar for 11 years. Alexander beat out thousands of other guitarists to take the title in Guitar Player’s Guitar Hero competition in 2006. As a result of his win, Alexander was invited to play at Muriel Anderson’s All Star Guitar Night at the NAMM Show in January 2007 and was given an array of endorsements including: Peavey, Ernie Ball, DiMarzio, Radial/Tone Bone, Tom Anderson Guitar Works, George L, Buddha, Mono Cases, Celestion Speakers, Furman, Waves Guitar sounds, Mesa/Boogie, Tremol-No, Keeley Electronics, Shur Guitars, Jam Daily, Premier Guitar Magazine and Guitar Player Magazine.

His love for music is severe and his hope to bring music to the world is what he strives to accomplish!

​“I believe that music is one of the most universal gifts we are given on this earth. It allows us to speak without words and differentiates no color or race. I believe that the next generation is going to make a huge impact on the world and it is very important for us to spend as much time as we can helping them to enjoy this beautiful gift. Guitars in the Classroom is striving to accomplish this goal and the more support that we give them I think the better off our world will be. G.I.T.C is teaching a universal language that we all can understand! Just think, if we can break down these walls of communication through beautiful music how much better off we would be as a civilization. Music is the one thing we are all born with inside of us. We should all have the chance to learn how to harness it!! I believe that G.I.T.C. is helping to do that and more! Not only are they bringing music to the kids, they are also helping the teachers to learn and communicate through music. I feel so blessed to have enjoyed music as long as I have and I hope that in my lifetime I can help infuse the joy of music to as many people as I can!”