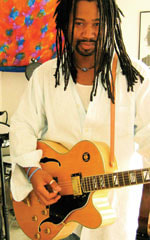 Tony James
Growing up amid the melodies and rhythms of everyday Manhattan, Tony’s passion for music formed early. He studied cello and voice as a boy, drums and percussion as a teen, and guitar in later years. At 15, he earned admission to New York’s High School of Music & Art (the Fame school), learning music theory and performance. After classes, Tony polished his skills onstage by playing with various bands in legendary New York nightclubs like the Ritz and CBGB’s.

After attending Berklee College of Music in Boston, the world’s premier institution for contemporary music study, Tony’s professional career was launched in 1987. He quickly became one of New York’s most sought after drummers and percussionists.

From 1998-2005, Tony starred in the Emmy-nominated and three- time Parent’s Choice Award winning Disney Channel series, OUT OF THE BOX!. He and co-star Vivian Bayubay played caregivers to a cast of ethnically diverse children, helping them explore ordinary life through music, art and dramatic play. His numerous TV musical performances include appearances on Roseanne, The Tonight Show, and the Jerry Lewis Telethon.