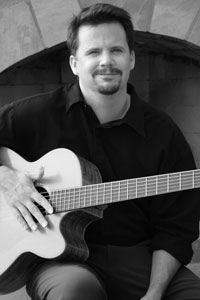 Tom Lunneberg
I suppose the short version of my musical bio is that I’ve been playing guitar for almost 30 years. I began my musical journey in junior high as a Clapton/Page/Hendrix-wannabe. After expanding my chops beyond the intro to “Smoke on the Water”, I started performing about twenty years ago. In the last eight or so years, my emphasis has shifted to acoustic fingerstyle music, including Hawaiian Slack Key, Celtic, and Blues styles. Musically, I consider myself to be a slow learner, but I’ve never stopped learning.

I have performed in a variety of playing situations over the years: I’ve played off-and-on in a San Diego-based band called Perspective Image since the early 90’s. We mostly do hotel dinner/dance gigs where they want a wide variety of dance music–not many guitarists can claim to have rocked the Freemasons at their New Year’s Eve party three years in a row… but I can!

In the early 2000’s I was half of an acoustic cover music duo called UnCovered. We played bars, coffee houses, and various private and corporate parties. This was perhaps the funnest arrangement I’ve ever been a part of– intoxicated mid-life professionals love to loudly sing along to the soundtrack of their youth. The audience was more entertaining than the band on more than one night… After the singer (the wonderful Staci Samaras) moved back east I decided to focus on solo acoustic performance and songwriting. The majority of my repertoire is pretty peaceful, so not surprisingly I mostly play weddings, coffee houses, wine parties, and art exhibits.

A really big influence on the development of my songwriting has been the Aloha Music Camp, run by famous Hawaiian musician Keola Beamer and his family. I’ve attended for the last five years, and every year I seem to come back with a new song. You can find more information in the links section of this site.

Though I’ve been involved with recording for a number of years, Pacific Tales is my first CD release. I wrote and performed all of the songs. The songs were mainly inspired by travel excursions around the Pacific region over the last five or so years.

The recording was done in my home studio, called the “Laughing Crow” because a noisy gang of crows hangs out in a a big pine tree right outside of the window (think Dumbo here…) They seem to intuitively know when I’ve hit the record button, which serves as the cue to commence screeching. During the mastering session for the album I was simultaneously horrified and amused to hear the crows very faintly in a few parts of the songs. If you don’t have the benefit of listening through 7-foot-tall speakers you probably won’t hear anything but it’s there. Despite their heavy-handed tactics, I refuse to cut the crows in for a percentage of sales as they have so brazenly demanded.