​“Timmy Riordan is at once clever, disarming, and thoughtful, bringing such care to his songs that you might forget his guitar is made of wood and not heart.” -Ellis Delaney 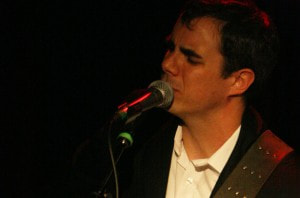 Timmy Riordan
Boston singer-songwriter Timmy Riordan plays a role in the world of contemporary folk music that reaches far beyond his own time on stage. He writes abundantly, performs regularly, and is on a mission to liberate songs from the pens and hearts of would-be folksingers everywhere. He is the force behind the Song Bomb and Fearless Songwriting Weeks–intensive training programs that teach musicians to overcome internal “resistance” and get the songs out of their heads and into your ears. It has worked for the likes of Girlyman, Ellis, and Vance Gilbert, and Timmy can make it work for you!

As a live performer, Timmy has a natural charisma and raw irony that has drawn comparisons to Elvis Costello and John Prine. He has the expansive spirit of a rocker, and the simple neighborliness of a folksinger. And, like all open-hearted artists, he roams from humorous to heartbreaking, wacky to wise, sensual to sardonic.

His favorite haunts are the cozy, legendary clubs of the Cambridge-Boston scene, especially Lizard Lounge and Club Passim. But his last couple years of touring have included stops at Oscar Blues, Colorado’s Rocky Mountain Song School, and numerous house concerts and club stages around the Northeast. He has released three CDs since his 2004 debut, the most recent New York’s Ignoring was released in 2011.