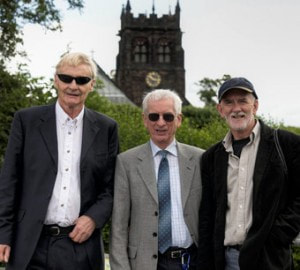 The Quarrymen
Everybody is familiar with The Beatles and John Lennon. But have you ever wondered where or what inspired John Lennon to perform and write music?
It was a warm afternoon in Liverpool that John Lennon and his skiffle group The Quarrymen were on stage when another teenager was listening in the audience. The date was July 6, 1957; John Lennon was introduced to Paul McCartney on that fateful day.

McCartney was introduced to the Quarrymen and played them “Twenty Flight Rock” and what impressed Lennon most was that Paul knew all the words to the song!

The two Liverpudlians bonded together and formed a musical partnership that would propel them as The Beatles from Hamburg to London to Sweden to France and finally to America on February 7, 1964.

Ed Sullivan introduced The Beatles to American teenagers and launched the emerging youth culture that would eventually change the world.

But what about those other lads on stage with John Lennon?

Those young early members of The Quarrymen would begin to drift away as Lennon & McCartney excelled as musicians. Rod Davis (banjoist), Len Garry (Tea-Chest bass), and Colin Hanton (drummer) would not make the musical transformation from The Quarrymen into becoming Beatles.

Fast-forward to July 1997, the 40th Anniversary of the day John met Paul. Liverpool was hosting a celebration and invited the remaining original members of The Quarrymen to stage a reunion at the Woolton Village church they performed at in 1957. The lads had such a fabulous time together that they recorded their first studio album.

An offer to tour the United States in 1998 was inked and the lads were soon touring foreign cities around the globe. Although the musician membership in The Quarrymen has fluctuated over the last decade, Rod, Len and Colin have stayed in the fold.
A chance meeting with Beatles biographer Hunter Davies in Cuba motivated the author to publish their collective biography in 2001, sketching out the embryonic years of Lennon & McCartney’s development. In 2004, The Quarrymen released their second studio album.
The Quarrymen have continued to tour and look forward to launching a U.S. tour on John Lennon’s birthday in New York City this October 9th.

True to their skiffle roots, the band is thoroughly entertaining on stage and members share their memories of those long ago days when they played together with John and Paul and later, George Harrison.

Colin Hanton and John Lowe (unable to accompany the group on this tour) participated in the 1958 recording of “In Spite Of All The Danger”, a Harrison-McCartney composition. Len Garry sings lead vocals now on this wonderful number. This band was the musical foundation for John Lennon’s prolific career. This is your chance to experience the skiffle sound that sparked John Lennon’s imagination.