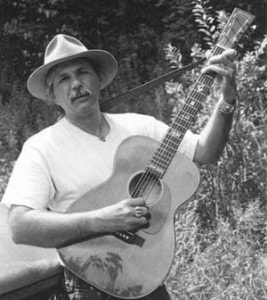 Rik Palieri
Rik Palieri- Folk-singer, Songwriter & Storyteller Rik is a talented singer, song writer, multi-instrumentalist, storyteller and member of “The Mythical Order of The Rose Tattoo”, who lives the musical life to the fullest. He is a very energetic performer who captivates audiences of all ages with his stories and songs. In a typical performance Rik will sing an old ballad with a fret less banjo, stomp out a Leadbelly style blues on the 12 string guitar, squeeze an exotic instrumental on the Polish bagpipes, spin out a wild and wooly story of his travels, pluck out a tune on the Ozark mouth bow, blow a mournful melody on the Native American flute and end the evening with an original Yodel-sing-a-long Rik has performed at concert halls, schools and festivals throughout the lower 48 states, toured Alaska by float plane, rode camel-back in Australia and sung on trains throughout Europe… He has appeared on countless TV programs including recent spots on ABC’s 20/20. He also has his own Public Access TV show “Song Writers Notebook”, that has featured interviews with artists like Pete Seeger and U. Utah Phillips. Rik has recorded six albums. His newest CD is called “Hobos & Heroes”. He is also an occasional writer for Sing Out!, Banjo Newsletter and author of a new book “The Road Is My Mistress, Tales Of A Roustabout Songster” available on Amazon.com

RIK We call him Totem Pole. Well, it suits him. Here he comes now, strong, upright, his whole body festooned with instruments: banjo, guitar and a quadriplegic goat he claims to be Polish bagpipes. And they are! Once played, they’ll clean the wax out of your ears or make you wish you had more. Tote ‘em Pole, that’s him. Well, just part of him, the hobo part. The rest has to do with music, our music. And the road, long stretches of midnight highway, booming on to the next last lost town at the end of the world. You take all the best of who we’ve become, we Americans ; our plain, honest voice, our wandering soul, the deep, true poetry of all our places, trust, honor, hard-working hands and hearts at peace. Take all of these, stitch them together with our people’s common music, the ring of the banjo and happy feet stomping away the darkness – and somewhere in the middle of all this you’ll find Rik. He has more time and miles on him than a prospector’s mule. But he has turned up the gold. It shines from a thousand stages where, night after night he gives back to some of us what he’s learned from the rest of us. Always giving, only taking what balances out. Now, this book is part of that balance. The pay-back. This is an American life only because of all the American lives, past and present, that have flowed into and filled it up. All the hardship, all the open-handed love, the great adventure we’re all in whether we know it or not., you’ll find it all here in this one, same as you’d find it in all of us. But Rik tells it and lives it and sings it and it all comes out, like the old fiddler said, “finer’ than snuff and it ain’t half as dusty”. – Utah Phillips April, 2003