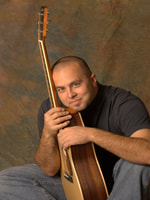 Randall Williams
Two hours after informing his voice teacher that he was leaving the world of classical music, Randall Williams graduated from the Royal Conservatory of Mons, Belgium at the head of his class.

He felt that classical music lacked the inclusiveness of folk music, and that the inevitable division between performer and audience was unbearable. And so Randall returned to the world of traveling with his guitar, writing songs in train stations and sleeping on couches, then singing and playing on street corners, cafés, and pubs. For a time he lived aboard a 20′ sailboat that he bought for $800, teaching himself how to sail by single-handing through the Baltic and North Seas with his guitar sleeping in the berth beside him at night. He wrote a book about the trip, which begins with the story of almost getting squashed by a tanker before dawn one morning in the North Sea.

He moved to North Africa, then set off across the Sahara by hitching with locals – bouncing through a minefield on the way that made his mother have bad dreams. He loved the adventure, but he missed the music.

In 2005, Randall returned stateside to scrounge up a career as a performing songwriter, hoping it wasn’t too late. So far, it hasn’t been. As the “Partial Capo Guy,” Randall has written two books for Hal Leonard, recorded a DVD for Kyser Musical Products, and given workshops at some of the biggest festivals in United States. As a performer, Randall has been a finalist in the Founder’s Title and Mid-Atlantic Song Contests, A regional finalist at Kerrville, a showcase artist at Northeast and Midwest Folk Alliance, and at the International Folk Alliance in Memphis, and an Audience Favorite at the Falcon Ridge Folk Festival. His 2007 live release, “One Night in Louisiana” made a respectable dent in the folk DJ charts (One single, “Lebanon,” was #8 in May,) and he’s generally a nice guy to have around, capos or not.

Randall is as much at home in a Bangkok slum or a Senegalese village, at the Kennedy Center in D.C. or the Fine Arts Palace in Brussels sandwiched between a twitchy orchestra and a full house, or shoeless on the floor of your living room. Randall has sung in a dozen languages in over 35 countries.​

​Lynne Andrews: “When Randall left the confines of classical music largely behind, they lost a great talent, but the world gained a good friend – a friend who will tell its stories with grace, compassion, humility and humor.”