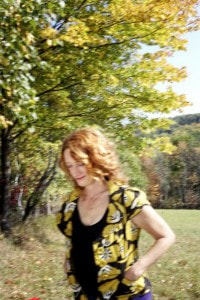 Patty Larkin
Patty Larkin has always prided herself in her creative approach to music. With WATCH THE SKY, Larkin has created a one of a kind release that she wrote, produced, engineered and edited. Larkin wrote and recorded much of the material as it came to her, assembling tracks and sounds as she went. The result is a raw, intimate gorgeous sound that is all her own. Here Larkin has experimented with a kaleidoscope of sounds, from her “slapsteel” guitar (lap steel detuned, played with drumstick and hand) to the “baribow,” an organic take on a string section, played on electric baritone guitar with a child’s violin bow. Things take off with a hip hop tinged piece, sung in the voice of a ghost walking the house with a wailing electric blues guitar part, to intimate acoustic guitar with orchestral underpinnings and vocals in the style of Nick Drake. The concept of combining acoustic instruments with modern technology has always intrigued Larkin, and she accomplishes this feat gracefully on SKY.

Larkin’s treasured past co producers, Bette Warner and Ben Wittman, joined her at regular intervals to collaborate and give feedback, but much of the process was a solitary venture for her. “I’ve always been a writer who enjoyed the solitude of the creative process. Learning the technology to be able to record myself and edit it down was something I’ve been working towards for quite some time. Some of the songs were written in a stream of words as the tracks rolled by, most all of them were recorded immediately after having written them. I feel that I’m stretching myself as an artist on this one. Reinventing how I create. It was a thrilling, at times harrowing experience.”

Patty Larkin grew up in a music and arts oriented family in Milwaukee, Wisconsin. Descended from a long line of Irish-American singers and tale tellers, her mother is a painter, her sisters both musicians. She learned at a young age to appreciate the beauty and magic of the arts. She began classical piano studies at age 7, and became swept up in the sounds of pop and folk in the 60’s, teaching herself the guitar and experimenting with songwriting. An English major, Larkin wrote songs throughout her high school and college career, starting out in coffeehouses in Oregon and San Francisco. Upon graduation, she moved to Boston and devoted herself to music, playing on the streets of Cambridge and studying jazz guitar at Berklee College of Music and with Boston Area jazz guitarists. “I wanted to learn as much as I could about the instrument, how to read for it, how to play anything. I realized the enormity of the task, and somehow gave myself permission to climb the mountain. I’m still learning.”

Patty is a rare combination of talents. Over her 10 CD history, she has honed a reputation as a “musician’s musician”, working with some of the brightest talents in American music. Long a favorite with critics, Patty is that unique level of artistic sophistication – one that her audiences have come to appreciate and her new fans will love. Patty Larkin has achieved a personal best with “Watch the Sky.” The ever evolving artist has continued to search for a new voice, a fresh palate. Watch the Sky. Watch Patty Larkin.

Why do you believe music is an essential part of a healthy and well-rounded childhood?

“I believe that music enriches and enhances a child’s growth. Listening to music and learning to sing and/or play an instrument trains a part of the child’s brain that is only accessible by means of the aural arts. Through music kids learn to apply abstract thought to their real life experience. Music is an essential part of any culture, as well as a spring board for cross cultural communication.”

What made you become an advocate for Guitars in the Classroom?

When my co producer Bette Warner and I put together La Guitara, a compilation of women guitarists, we researched non profits that bring music education to kids. We selected GITC as the beneficiary of a portion of the album’s proceeds because it works on many levels. By training classroom teachers and
providing to music for kids in the classroom setting, GITC has succeeded in giving kids access to a world of music that would otherwise not be available to them. By learning to play the guitar, kids can also learn math, sociology, history and…music.

Would you care to share what got you started playing guitar as a young person?

I started playing guitar because I loved everything about it. The size, portability, intimacy, as well as the opportunity to play what I heard on the radio, or what others were playing around me: songwriters, blues players, jazz players, folksingers, Brazilians, gypsies, rock stars.