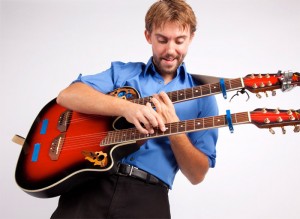 Mark Kroos
Mark Kroos plays 2 guitar necks at the same time. Currently based in Williamsburg, VA he is one of the only people in the world touring his trade. His primarily instrumental style is characterized by open harmonies, polyphonic textures, incredible tapping technique, and is as entertaining to watch as it is to listen to. Live performances burst with energy and magnetism not typical of solo guitar music. Drawing influence from folk, Celtic, indie, and even punk rock artists as well as other great guitarists such as Michael Hedges, Phil Keaggy, Tommy Emmanuel and Leo Kottke, Mark Kroos has developed his own edge to the acoustic guitar.

“Mark Kroos plays with a sensitivity to the music and positive energy that is truly refreshing.”
-Muriel Anderson

​Mark’s debut solo album, And Grace Will Lead Me Home was released in January, 2010 to rave reviews. The album features Mark on both double and single neck guitars with no overdubbing and also employs his own innovative studio technique of separating the two signals from the double neck for stereo purposes. Tracks from the album have been licensed for multiple productions on CNN.

In May of 2010, Mark embarked a sparsely-booked road trip, giving up his apartment in Williamsburg to play coffee shops and bars, relying on donations, human kindness and the grace of God. This road trip blossomed into a year-long concert tour filled with performances, clinics, and a multitude of new friends.

While on tour Mark wrote and recorded 4 track vocal EP titled The Sound of Snow, released in January, 2011. Themes from the album include traveling, homelessness, and most importantly, hope. The EP is intended as a thank you to all of Mark’s supporters and is available only for free online download at markkroos.bandcamp.com

Mark Kroos attended Bowling Green State University’s school of music from 2004-2006, majoring in Jazz studies and guitar performance where he studied under Chris Buzzelli and Matthew Ardizzone. He developed a greater understanding of the instrument and improved his technique immensely but also found that his ability was lacking in the jazz idiom and left the music school to tour with his ska/punk band, The Argonauts. When the band stopped playing regularly in 2009, Mark began teaching and picked up the acoustic guitar. A whole lot of writing, practicing and 2 guitar necks later there was the musical madness that is Mark Kroos.
​
Learn More about Mark
MarkKroos.com
DONATE NOW