“Art and life are one. My inspiration stems from art’s potential to ignite curiosity, the seed of transcendence. I am a native of Hawai’i and a citizen of the Earth; my music is guided by a burning desire to merge the cultural heritage of my kupuna (elders) with global themes, weaving the roots of Hawaii’s vast musical palette into a universal sound that includes influences from rock, bluegrass, African, Latin, Celtic, modern and folk music traditions.” 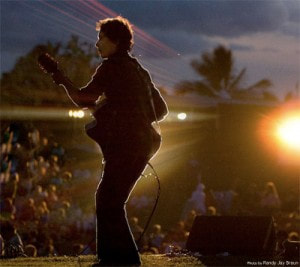 Makana
Early on, Makana was recognized as a child prodigy and he studied with Hawai’i slack key legends Raymond Kane and Sonny Chillingworth. He began performing professionally at Honolulu’s Duke’s Canoe Club at age 15 and has since produced his own shows in many of Hawaii’s other significant venues.

On August 27, 2009, Makana with his band and dancers concluded a successful two-month engagement, reopening the renovated Royal Hawaiian Hotel’s Monarch Room and inaugurating the hotel’s new “Curators of Hawaiian Music” series. The legendary venue had been dark for 14 years and the headline of the August 14, 2009, Honolulu Advertiser review by veteran Hawai’i Entertainment Reporter, Wayne Harada read, “Makana proves he’s a master of the showroom.” The legendary ukulele player, Bill Tapia was in the audience one evening. The 102-year old “Uncle” Bill had opened the historic Monarch Room in 1927.

Bill Tapia has often appeared on stage with Makana. In November of 2003, Tapia and the 96-year old steel guitar legend, Tau Moe were featured in one of the four successful shows the young artist has produced at Honolulu?s restored Hawai’i Theater. During his long career, Moe had toured Europe and the US with Frank Sinatra, Tom Jones and The Platters. Makana notes, “Nobody plays like these old-timers. It’s an honor for me to share the stage with them and introduce my audience to them.” Sadly, this was to be Tau Moe’s last public performance.

A prolific songwriter, Makana’s audiences run the gamut of age and ethnicity and he enjoys a particularly strong local following. In 2000 his first album “Makana” was voted “Best CD” by the readers of the Honolulu Weekly; he also earned the “Best World Music Album” and “Adult Contemporary Album of the Year” at the Hawai’i Music Awards. He has contributed songs to two Grammy-nominated albums, “Hawaiian Slack Key Kings Volumes I & II”.