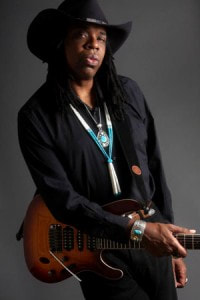 Larry Mitchell
Larry started playing guitar at age 9, after his mom through his drumset out the window. He is self taught on guitar. In 1986 and 1987 Larry won the New York City “Limelight guitar solo contest. In 1988 Larry toured with Spanish/Italian artist Miguel Bose. In 1990 his first CD came out (Larry Mitchell Grude BMG) 1991 He played on Ric Ocasek’s Fire Ball Zone Cd and appears in the music video “Rockaway”. In 1991 Toured with Rock singer Billy Squier and appears in the music video’s “She goes down” and “Hollywood”. In 1992 he toured with Folk pop sing songwriter Tracy Chapman.