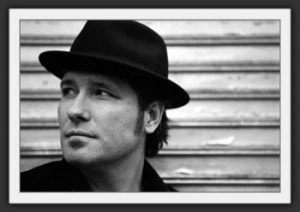 Jon T. Howard
“My dad went to prison when I was three, and my mom bought my first guitar with green stamps”.

Born in St. Charles, Missouri, Jon T Howard grew up the hard way. Few songwriters have lived to tell the tales that Howard serenely lays to paper and song. Romantic and masculine, bluesy-bitter and folksy-forgiving, wise and foolish; his understated and unvarnished lyrics cut to the heart of Howard’s complex soul. With the release of his newest CD, ‘Time For Something New’ on Mettafour Records, Howard, at a musical watershed in his life, puts it simply, ‘I’m making peace with the past.’ In his uncompromisingly honest music and gravelly voice, discerning listeners will detect a psyche at war with a lifetime of train wrecks witnessed. Howard: ‘The album is a bookend of what I’ve lived through and been a witness to.’ Jon’s love of his mother despite her turbulent marriage and her struggle with his stepfather’s addiction is the backbone for ‘Throw Another Penny;’ one of Jon’s strongest songs.

When Howard was a teenager his family moved to Chicago, and it was there that Jon began singing in a local bar band and composing songs. ‘I was the youngest member, and we were playing in all of these bars. My mom had to walk me in.’ Chicago stirred the blues in Howard’s soul. ‘I really liked Junior Wells, Muddy Waters and James Cotton, they have had big influence on my harmonica playing.’

While still in high school, Jon’s family once again relocated, this time to Dallas. A difficult move at the time but a blessing in disguise, the diverse musical influences of Texas would become a defining ingredient of Howard’s songwriting. While in Dallas, Jon started a new working band that focused on funk and R&B. “My personal taste ran to R&B, I wanted to do Marvin Gaye type songs – few had forged that path as a blue-eyed soul singer. However, ‘The powers that be’ had a different idea for me.’ Indeed. The 6’1” Jon’s good looks offered other options. ‘I modeled to pay my rent.’ As a print model, he traveled to the Caribbean Islands, Barbados, London, Milan, Spain and France. It allowed me to see the world.’ Jon wound up in London recording a “soul” record with noted producers Danny Puku and Bob Carter.

Back in the U.S.A. Jon moved to LA where he honed his songwriting craft with hit songwriters Gene Black and Monty Byrom. Howard then joined the controversial L.A. Funk/Rap/Thrash group Ku De Tah. The L.A. Music Awards acknowledged him for his hard-hitting lyrics on “Fish Outta Water” and “15 to 1.” Howard recalls; ‘It was an angry, politically-charged band and it eventually took it’s toll on us”.

Leaving the band to pursue something closer to his heart, he started writing acoustic songs with Infectious Groove’s Adam Siegel; then turned his attention to the making of his debut solo album, 1996’s ‘Americana.’

In 1997, Jon’s son Christopher was born. This caused him to refocus his goals and priorities. Jon spent time at home writing songs for the films; ‘Defying Gravity’ and ‘Civility.’ In 2000, he released a CD with 18 children’s songs called Christopher’s Daddy. Two more self produced CD’s followed; ‘Dreaming of America ‘and ‘Dance of Life.’ Jon T. Howard has walked life’s battlefield, without losing a limb. He knows where the land mines are buried, and he’s come out intact. Howard tempts you to step out in risk, just to see how it feels. Jon’s lyrics exalt the option to participate in life.

His musical heroes include Bob Marley, John Lennon and U2’s Bono ‘For seeing the world in a greater light,’ Jon: ‘I also feel the need to do more. You can’t save the world as a whole but you save one human at a time, and hope you can be a positive influence. I like to believe in and try to find the good in all’.

But first you have to save yourself. As an album, ‘Time For Something New’ is an ironic culmination of Jon’s emotional journey and acknowledgement of his own demons. Jon’s addiction is not to alcohol, drugs, or even tobacco. Clean as a whistle, the athletic, Harley riding Howard’s personal struggle has been with love. Howard groans; ‘Oh, I’ve been there. Still am. ‘La Da Dee, La Da Doe’ says it all…love will break your stride if you let it.’ Married three times, Howard is sublimely qualified to comment on messy matters of the heart as heard in his songs ‘Time For Something New.’ and “Sometimes It’s Love” That said, Howard is an eternal optimist who believes in the virtues of love and lives life to the fullest.

Jon T swirls in gritty reality. But, do not mistake the laid back tone of his music for a lack of poignancy. He paints vivid pictures of heartache, loss and redemption in “Potterville” and “In The Eyes of Love”. His ability to let go and heal from all the turbulance and pain of his family life is heard in ‘A Walk in the Park.’ ‘Throw Another Penny’ brilliantly illustrates how he turns suffering into song.

This art form demands raw honesty. No great singer songwriter can keep a secret; they owe it to their audience to come clean. Howard is ready for the scrutiny. He shares a particular earthy quality and brutal honesty that singer/songwriters Leonard Cohen, Steve Earle and Bruce Springsteen possess.

Jon T. Howard has channeled that grounded emotion with his all star band, to achieve a genre defying sound that is all his own. Jon: ‘I want to make great records that stand the test of time; Grammy quality records. ‘Time For Something New’ is a culmination of all the years of trying.’ Old and new friends joined Jon on this CD’s journey: Shawn Pelton, who has recorded and toured with Sheryl Crow, Rosanne Cash, Shawn Colvin and Marc Cohn just to name a few, played Drums. Duke Levine, who has spent years as Mary Chapin Carpenter’s guitarist, played Guitars & Mandola. Paul Bryan, who records and tours with Aimee Mann, played Bass, Ben Wisch added Wurlitzer and keyboards, Greg Krueger played Guitars & Mandoguitar, and Stephanie Winters is featured on Cello. Amy Helm & Glenn Patscha from Ollabelle provided Backing Vocals. The CD was recorded in New York City and produced by Ben Wisch. Wisch also produced Grammy winner Marc Cohn’s first two records including his classic song “Walking In Memphis”.