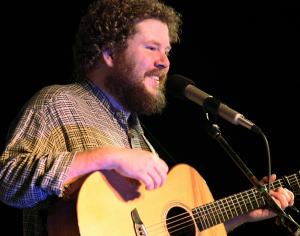 Joe Jencks is an international touring performer, songwriter, entertainer, and educator. From venues like Lincoln Center in New York, to coffee houses, festivals, spiritual communities, and schools, Joe Jencks has spent the last nine years touring full time. His songs have traveled to every continent via radio, CDs, web casts, and other musicians. He is noted for his unique merging of musical beauty, social consciousness, and spiritual exploration. Jencks weaves a diverse web of stories with brilliant musical skill, ensnaring even the most rigid of hearts, inviting them to open. His songs invite us to live inside of our passions and our beliefs.

Jencks applies his conservatory training to a contemporary genre, and offers the listener the best of both worlds. Drawing on his Irish heritage (dual U.S./Irish Citizen), Jencks uses his lush and lyrical voice to enchant, heal, and inspire. Jencks has won numerous songwriting awards and is also highly regarded as a song interpreter. Joe’s latest release, Links In A Chain, highlights this aspect of his work.

Links In A Chain is Jencks’ 7th CD, and his finest work to date. The recording features six new original compositions and six songs written by some of Jencks’ mentors and influences. Included are songs by folk legends Phil Ochs and Bob Gibson, as well as a vivid rendition of the American classic, Joe Hill. In his original compositions, Jencks explores a wide range of topics, including family history, staying in love, and a brand new piece in the Irish tradition called On Eireann’s Shore. This beautifully lilting love song genuinely honors his heritage, and sounds as if it could have been written a century ago. A Grammy winning team of engineers and supporting musicians contribute to make the recording an exceptional piece of work from start to finish. Guests include: Jon Carroll (Mary Chapin Carpenter’s pianist) on keyboards, Pat Wictor on slide-guitars, Jim Robeson (Bass & recording engineer) and Charlie Pilzer (mixing and mastering engineer).

Joe’s recent release The Candle And The Flame, gained international acclaim and made it to the top of the Folk charts in the US. Links In A Chain is expected to do the same. This recording combines many facets of Joe’s diverse musical background and weaves them all together in an aural tapestry that is warm and exquisite. Jencks has the passion of Gospel singer, the knowledge of a classical vocalist, and the soul of an Irish Tenor. And at the center of Joe’s music is an abiding love for humanity that transcends the everyday and boarders on the mystical.

Joe Jencks will debut at Carnegie Hall in New York, November 16th through the 20th, in a program for NYC public school students, sponsored by the Weill Music Institute at Carnegie Hall.

​“In these times, we need the singers who will do the homework and tell the stories! Joe Jencks is among the fine next generation singers who are ready to carry on the tradition as well as look into the future” “Holly Near, Ukiah, CA

“The key to the future is people joining in. The music of Joe Jencks captures this essential spirit. Joe is a fantastic singer who carries on the traditions.” -Pete Seeger

“Listen to Joe! A clear tenor voice; a heart that’s in the right place, close to the skin; a sense of justice tempered by a sense of humor; and a CD that captures it all in rich tasty arrangements. How can you go wrong?”
•Charlie King, Songwriter and Performer, Shelburne Falls, MA

“The next time someone says that folk music has lost its conscience, lacks great protest songs, or has lost its connection with its causes, I will sit them down and play Joe Jencks’ CD, I Hear Your Voice. Jencks sings with a superb tenor voice, and picks flashy guitar… that doesn’t obscure the beauty of his voice or the words of his well-crafted songs.” -Sing Out! Magazine, Rich Warren “Host of ‘The Midnight Special’ WFMT “FM Chicago, IL

“Joe Jencks is the type of musician that will cause you to drop that morning newspaper or pull your car to the side of the road when you hear his songs. He is the type of artist that will turn heads in his direction when he walks onto a stage. His voice will instantly draw you into his passionate songs. He is the type of musician whose music will become part of you. His craft and artistry will remind you of the best efforts of Phil Ochs, Stan Rogers, and Woody Guthrie. The troubadour tradition is alive and well in the 21st century with the music of Joe Jencks.” -Ron Olesko, WFDU “FM Teaneck, NJ

“I find that Joe embodies the spirit of Pete Seeger. In much the same way, Joe has his finger on the pulse of our grassroots social conscience, and passes it on for us to scrutinize. Every generation needs a voice for social justice and Joe Jencks is one of those very important voices.” -Judy Matzen, Off the Square Concerts, Woodstock, IL

“Joe Jencks is one of the Northwest’s best-not-kept secrets; a singer-songwriter with a warm, smooth, powerful voice, and memorable finely crafted songs that have something to say. He moves freely between the worlds of contemporary acoustic pop and traditional folk, alternating and combining them into a rich and satisfying musical mosaic!” “Richard Middleton, Victory Music Review, Seattle WA

​Sharing The Stage With…