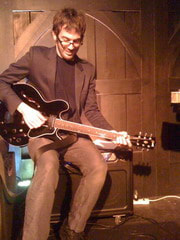 Drew is a professional guitarist from Baltimore Maryland.

In 2006 (seven years ago) he moved to Los Angeles to pursue music full time. That was a 2,707 mile move across country to do what he loves every day. Things have gone well for him!
​Drew tours as the guitarist for Selena Gomez, Victoria Justice, Demi Lovato, Carolina Liar, Taio Cruz and others you might have heard of.
​On the road, he plays huge concerts in arenas in front of thousands of people. But at home he likes to play acoustic music with his own band. Then he plays guitar and pedal steel. He likes all different types of music. He grew up on Classic rock- Jimi Hendrix, Led Zeppelin. These days he’s been listening to a lot of bluegrass.
​How Drew learned to play guitar

​“I started playing when I was 13. My older brother played before I did. He got me started and showed me the basic chords, but taught me the importance of being able to figure out music for myself by ear. Once I got the basic down, I started listening to records and learning my favorite songs. Songs teach you all you need to know.” Drew’s brother is also a very talented musician named Evan Taubenfeld who is the lead guitarist for Avril Lavigne. And Drew’s favorite food Is Pizza. Just plain cheese. He says, “why ruin a great pizza with a bunch of toppings?”

​Guitars in the Classroom is very excited that Drew and his band are coming to perform for your school and to share with you about becoming a working musician. We hope you’ll be ready to ask him some great questions!
DONATE NOW