“After my first international musical experience…I saw the importance of meeting musicians and artists from all over the world and being exposed to different cultures. To this day, my teaching incorporates this passion for cultural understanding through the arts.”​ 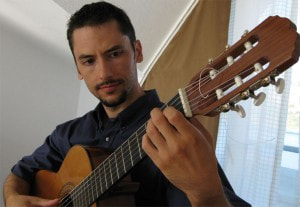 Dr. Emre Sabuncuoglu
Few people in this age of specialization have such a broad range of interests as Emre Sabuncuoglu. From his childhood, he has looked upon learning as an adventure, soaking up knowledge with a thirst few can match. Growing up amid the cultural riches of Ankara, Turkey, he spent his evenings with his father, a mathematician, talking about the wonders of mathematics, of the natural world, and of life itself. Many evenings, his family played music together–his father on the saz (a stringed Turkish folk instrument), his mother on the mandolin, and his grandfather on the violin. One could not imagine a more nurturing environment for developing a thirst for knowledge and a passion for art.

In elementary school, Turkish children may choose an elective course in the arts or in sport. Given his natural love for music, Emre chose to learn to play the guitar. Within three or four months, he envisioned himself someday playing classical guitar masterpieces, so moved he was by their beauty. As his technique developed, his parents took him to one of the very few classical guitar players in Turkey, Ahmet Kanneci. Kanneci, seeing the potential and passion in his young student, put Emre in an intense practice program. Two years later, Kanneci encouraged him to enter his first international competition in Pau, France. The summer course preceding the competition was one of the most inspiring times of the young man’s life, learning from artists such as Jorge Cardoso, Javier Hinojosa, and more.

Emre won that competition, a long shot in a field of some of the best young guitarists on the planet. Yet, there was little future for a classical guitarist to make a living playing the guitar in his country. Emre turned to his other love, mathematics, eventually completing his master’s degree in the subject in one of the most rigorous schools in the world, Middle East Technical University. He taught and played the guitar in his spare time, but focused, for the most part, on mathematics.

Fortunately, his advisor at METU, Andreas Tiefenbach, was a violinist and composer as well as a mathematician. Conversations with Tiefenbach about mathematical concepts shifted to conversations about composing, music, the building blocks of harmony, and music’s relationship to mathematics. Emre began to envision the possibility of combining his two interests to carve out a unique career.

After having completed his master’s degree in mathematics, he turned to music. That decision proved to be the catalyst through which Emre would combine his two passionsâ€“mathematics and musicâ€“as he studied music theory, composition, guitar technique, world music and Flamenco guitar, first, at the New England Conservatory of Music, and later, at the University of Southern California’s Thornton School of Music. Finally, Emre was able to conduct the research that he had dreamed of doing as a graduate student in mathematics. His work did not go unnoticed.

In February 2005, the Young Guru Academy, whose mission is “to select, educate, train and inspire creative, innovative, and socially responsible leaders” of Turkish descent to participate in its annual leadership camp for the purpose of sharpening their leadership skills, igniting their creativity, and inspiring them to seek ways in which they can use their gifts to benefit their communities and the world. That training was soon to pay off big dividends as Emre took on a leadership role in a new endeavor.

In 2005, Emre joined forces with Thomas Foster to start the Los Angeles Guitar Academy. With his broad academic background, thirst for learning, and excellent preparation, Emre was a natural at teaching as well. Commendations from students tell of his care for their musical and personal development. Warm and welcoming, Emre reaches out to a diverse student population with genuine care and concern. He incorporates visual, kinesthetic, and auditory cues to accommodate each student’s distinctive learning style. Emphasizing his students’ strengths, Emre has helped even struggling learners to achieve a high degree of proficiency on the guitar.

In addition to teaching, Emre performs, arranges, and composes–one of the most gifted and versatile musicians of his generation. His interest in ethnomusicology has led him to develop not only as a classical performer, but in performing a wide range of works from many nations.

He has shared the stage with many of the world’s leading guitarists such as Rodrigo Riera, Alirio Diaz, Roland Dyens, Hopkinson Smith, Ernesto Bitetti, Luiz Zea, and Aquiles Baez. His work has earned many prestigious awards.

In 2006, he finished his doctorate, writing a groundbreaking thesis on mathematics itself as the foundation for music. Currently, in addition to performing and teaching, Emre is arranging several of Domenico Scarlatti’s keyboard sonatas for the guitar.