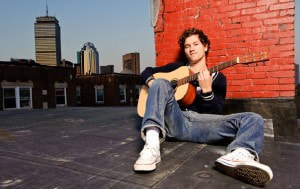 Daniel Revel Miller
Bob Marley once said “In this bright future you can’t forget your past.” Never has this mantra been more true than with breakout artist Daniel Revel Miller, a singer and songwriter who transforms his background and experience into catchy and up-tempo party beats.

Born and bred in Goleta, CA, Daniel Revel Miller grew up in a land of beaches, beautiful girls, and bright sun. While this might be distracting for even the most disciplined, Daniel developed a passion for music from a young age, messing around with beat making and his first instrument, the guitar. Before long, he was singing and composing songs influenced by his California roots and global travels to lands far far away like Buenos Aires and Shanghai.

Daniel eventually ventured off the West Coast to attend college at Boston University where he continued writing and recording music in his dorm room while completing a degree in entrepreneurship. Focusing on [cute girls] music in his free time, Daniel began to release his songs to friends in late 2008 to an overwhelming response, especially to party favorites “I Got that Good Shit” and his debut single “Lemonade”.

After graduating BU in 2010, Daniel put his entrepreneurship degree to good use and co-founded the record label RevelMe Records. He also made his debut onto Boston’s music scene, performing to packed crowds at Harper’s Ferry and venues throughout the city.

With influences ranging from The Fugees to Dr. Dre, Daniel Revel Miller brings a unique sound fusing West and East Coast vibes with international flare. Inspired by the songs he hears in his head, Daniel can often be seen recording song lines or raps into his cell phone while on the go. Daniel Revel Miller is currently working on his debut album, set to be released later this year.
​
DONATE NOW