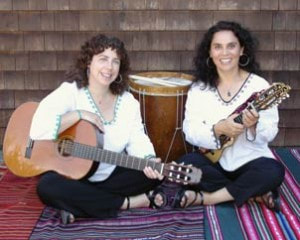 Colibrí, Spanish for hummingbird, is a duo that presents lively, interactive musical journeys through Latin America.

Using an exciting array of traditional folk instruments, Lichi Fuentes and Alisa Peres create a bridge linking children in the U.S. with those in the Spanish-speaking world.

Their extensive repertoire includes selections from many different countries – from a Bolivian festival song about a mother dancing with her baby to a Chilean song about worms, as well as popular Mexican singalongs.

Children leave Colibrí concerts tapping a new rhythm, remembering some words in Spanish, or wondering what life might be like in faraway places.

Named “Woman of Note” by the San Francisco Women’s Foundation, Chilean-born Lichi Fuentes was the founder and lead vocalist of the group Altazor. Currently musical director of the La Peña Cultural Center community chorus and member of the Cuban band QBA, she also performs her own repertoire, having released a solo album Quien Soy / Who I Am in 2003. In addition, Lichi conducts choirs and music classes in elementary schools. She has been performing with Colibrí since 1993.

Alisa Peres co-founded Colibrí in 1989. She also plays with the Andean ensemble PachaSiku, and has performed with musical groups in Ecuador and Peru. Alisa is a Spanish and music teacher in several elementary and preschools. In addition, she directed the weekly Amiguitos children’s performance series at La Peña Cultural Center for seven years.
​
Colibrimusic.com
DONATE NOW