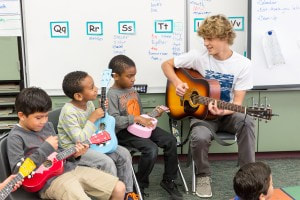 Cody in a GITC first grade class at Normal Heights Elementary
Cody Lovaas’ creativity and talent are evenly matched with his commitment to benefiting his fellow human beings. He serves as Guitars in the classroom’s Youth Music Ambassador, visiting GITC classrooms and performing in concert with percussionist Angela “AC” Cutrone at GITC schools. Cody engages students and faculty in the music, supporting them to discover and develop their own special gifts and understandings.

Dallas born, San Diego-raised singer-songwriter Cody Lovaas has discovered a voice and pure direction that make it hard to believe he is only sixteen years old. His preferred means of travel is a surfboard, which carries him through crystalline days along the Pacific Coast. Influenced by artists such as Jason Mraz, Jack Johnson, Ben Howard and his local peers, Lovaas seamlessly combines his love for music and surf into fluid blues-imbued acoustic machinations.

Lovaas is beginning to carve out the early stages of a signature sound. There are three things that Cody is most passionate about: music, surfing, and the desire to make a difference in the world.​
DONATE NOW